Yellowkorner is pleased to present its artists from the street (or urban) art movement. This movement from the street showcases various methods such as graffiti, stencil paintings, or stickers and posters. These artists entrance us with their photographs brimming with the colour and originality of urban art style, also known as street art.

Graphikstreet plays with forms, colours, and fonts to present “rhythmic, pop” collages strongly inspired by the advertising of the 1950s. Here, he questions the relationships between humans and machines. He thus perpetuates the art of collage that emerged with Picasso and his Still Life with Chair Caning in 1912 and became widespread through the pop art of the sixties.


« Perfect art is therefore inaccessible, but the path to perfection is what we should appreciate.»

An admirer of Jean-Michel Basquiat, Graphikstreet is passionate about design and street art. He is highly influenced by pop art and the advertising of the fifties. He intermingles these worlds in his artworks.

He combines photos, drawings, and press clippings in his collages. His goal is to find the right colour to highlight and the right typography to isolate in order to create an effective visual. With his large-format images, words are superfluous since the eloquence of the images is meticulously constructed through the quality of the print, the mastery of the organisation and composition, perfect knowledge of the vocabulary of the design and packaging, the rigour of the scientific exposé, and neutral lighting. A surefire hit: a master of communication from the offices of the biggest marketing agencies, his message hits all targets with all the precision of an elite shooter.

Polar Bear is a “street stencil artist”, as he defines himself. He lives in Paris but his artworks can also be found on the walls of London, Berlin, or Amsterdam. This series presents several versions of one of his earliest works: Art is Life. They were made with a stencil, either on kraft paper glued to the wall or by applying spray paint directly to a white wall.
He is a child of street art and loves working on materials found in the street. His style and technique are recognisable due to his multi-layered approach. The Art is Life series initially comprised four layers measuring 30 cm, then evolved into the latest version of fourteen layers measuring 130 cm.

Born in Argentina, Peperina Magenta lived in Mexico during her studies in design and graphic design. She was strongly influenced by Mexican art and its bright colours. She subsequently created her own collages, combining pop art and 1950s nostalgia, in the form of myriad ‘pop-ups’ that unfurl before our eyes, full of joy and colour. Her first collages were based on her grandmother’s fabrics.

« Through my art, I hope to express the singularity of love, with collages in vivid colours.» 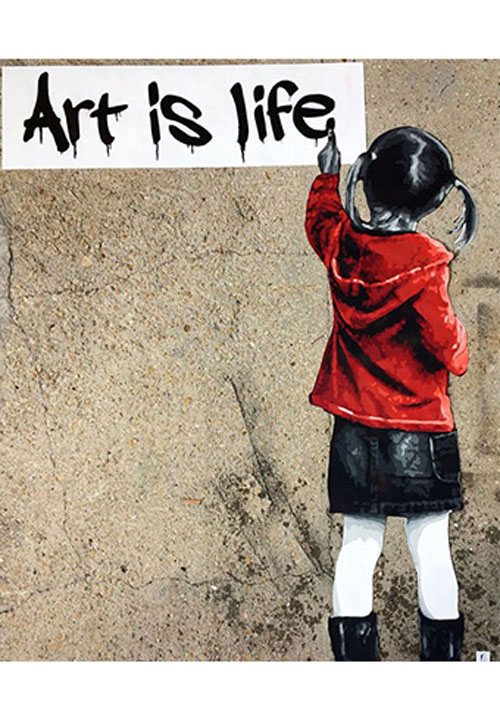 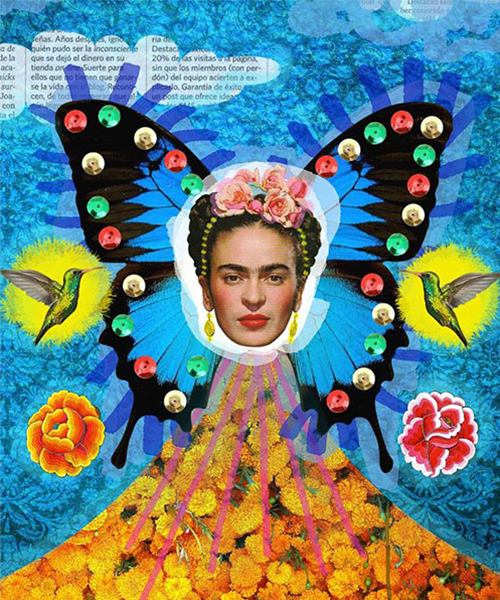 Clovis Lalanne spent the early years of his life in West Africa before returning to Paris at the age of 25 to become a photographer. He is entirely self-taught. He brought back a strong conviction from his many travels through Guinea, Senegal, and Mali: the school of life is worth all the schools in the world. On his return to France he became a freelance photographer. He worked for various fashion houses, notably for haute coiffure, for the LVMH group and the Saint Laurent label. He also became the official photographer of the Parisian make-up school Make Up For Ever.
For these body-painting photos, he worked in indirect lighting to improve its distribution and soften the shadows, and later with a tripod to best guide the model to coincide with the background.

« For the trompe l’œil effect to function, I worked with indirect lighting so the light would be more diffuse and to soften the shadows. »